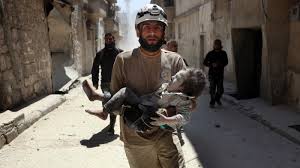 Over 400,000 Syrians have been killed in the last five years, and many were innocent civilians. The White Helmets is a 40-minute documentary on Netflix that takes place mostly in Aleppo.  It’s very violent and shows real footage of bombs being dropped, buildings collapsing, and dying or already dead people being pulled from rubble. The documentary is  about a group of people who live in Syria that go by the name the White Helmets and whenever there is a bombing, they’re the first to respond and try to save anyone in need. The situation in Syria is only getting worse every day and no solution is in sight, all around is rubble of what used to be buildings that families lived in. Before joining the White Helmets, one of the members of the group, Mohammed, a former tailor,  fought for the opposition for three months but left when they started targeting civilians; Mohammed said, “It is better to do humanitarian work than to be armed, better to rescue a soul than to take one.”

The White Helmets team is also know as Syria Civil Defense and has a total of 2,900 civilians just trying to help other human beings no matter what race, religion, gender, friend or foe. This is very heroic and should be recognized because all they do is help in spite of the over 200 air strikes day after day, expecting nothing in return. Khalid, a former builder, has been with the White Helmets for three years.  He said, “But the hardest thing is seeing dead bodies. This affects me a lot, but this is my duty and my job.” The amount of deaths in Syria continues to rise every day and it is completely unnecessary. The documentary states that most of the bombing is by the Russians, who claim they are fighting ISIS but are only bombing civilian neighborhoods and have even targeted schools and hospitals. The fact that they say they’re fighting ISIS while killing hundreds of children every week is a sickening thought.

The White Helmets always manage to keep their moral high, but they all hope the air strikes and suffering ends soon. While some of them are away training in Turkey to gain more expertise with technology they can use to locate and aid in the saving of more people, Abu Zaid’s brother is killed in a hospital bombing.  It’s very hard to watch his reaction and to see him go through this. Let me make this clear when I say bombing, I don’t mean people are running around with bombs on their chest; planes and helicopters are flying above and dropping bombs on defenseless people and killing them unmercifully. I strongly recommend watching this documentary; it will really put everything into perspective and make you appreciate what you have, it’s very touching and inspiring. Watching it made me decide that I want to do more with my life, I want to be like them and make a difference.

None of them ever give up.  They will keep doing everything they can until either the bombings stop or they die. The motto of the White Helmets is “To save a life is to save all of humanity.” Since 2013, more than 130 White Helmets have been killed and they have saved over 58,000 lives in that time.