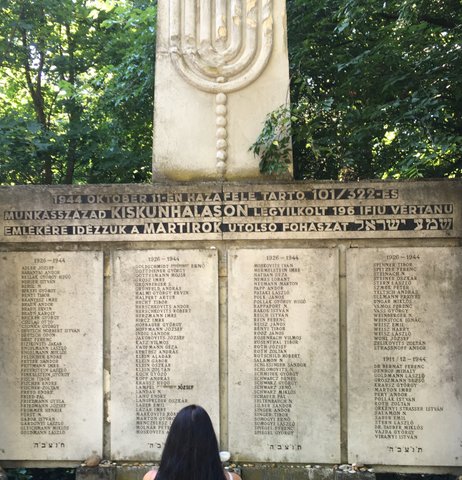 Ms. Lange in front of her father's Holocaust Memorial

Throughout the world, on January 27th,  International Holocaust Remembrance Day takes place. This year is especially poignant as Elie Wiesel, author of Night, Nobel Peace Prize Laureate, and Holocaust survivor is honored. Wiesel died six months ago. This is an international memorial day for all victims of the Holocaust. On this day, different parts of our country and the world have gatherings and memorials. It is held each year on the anniversary of the liberation of Auschwitz, the most notorious of all concentration camps.

“This picture was taken the day before my father’s 18th birthday when he had to report to a Hungarian Forced Labor Camp.  It was the last picture he ever took with his parents. My dad’s dad died of starvation and fatigue in a forced death march that began in Budapest and ended with his collapse just outside of Vienna.  The last time my dad saw his father, his dad begged him for a piece of bread.  My dad had nothing but a promise that he could not keep – that he’d be back to save him.  My dad was 80 years old and still woke up in the middle of the night hearing his father ask him for food.”

Ms. Lange’s father, who passed away two years ago, witnessed all of his friends that he grew up with, gunned down in front of him.  Out of a group of 200, only he and three others survived.  A memorial to those murdered teenagers can be found in the Jewish cemetery in Budapest, listing the names of all of his classmates murdered on the same day, teenagers with hopes and dreams just like the ones that fill our hallways.  Last summer, Ms. Lange took a group of students on an educational tour through eastern Europe with stops in Krakow and Auschwitz.  In Hungary, she visited his memorial in hopes of some closure.  “His wife wouldn’t tell us where she buried him or scattered his ashes, but I had a picture of him standing in front of the memorial.  I googled it, found out where it was, and went last summer.  Jewish people leave rocks rather than flowers by grave sites because rocks, unlike flowers, last forever.  As I was sitting and thinking about my dad’s life, I saw one really white and large rock right in the middle of the list of engraved names.  It had my dad’s name on it.  I guessed correctly – he was there with all his murdered friends.  That was the day that changed all the remaining days of his life.”

In 2001, Wiesel spoke on the day of remembrance: “How does one mourn for six million people who died? How many candles does one light? How many prayers does one recite? Do we know how to remember the victims, their solitude, their helplessness? They left us without a trace, and we are their trace.

We tell these stories because perhaps we know that not to listen, not to want to know, would lead you to indifference, and indifference is never an answer.

Whoever hates, hates everybody. Whoever kills, kills more than his victims.”