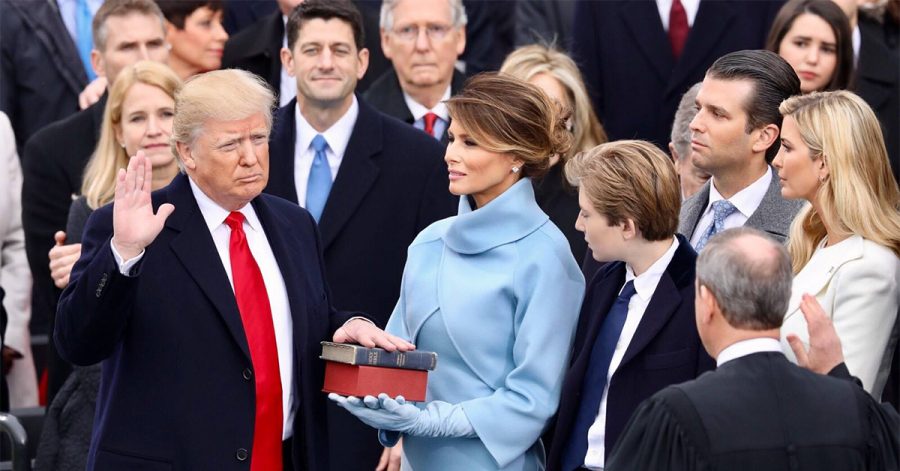 Donald Trump took his first steps as president on January 20th, 2017. He was met with both open arms and rejection from citizens, celebrities, and even politicians.

President Trump gave his inaugural address which resonated with many. He talked about his priorities as president and what his major goals were, including strengthening our border and eradicating ISIS. “…we are not merely transferring power from one administration to another, or from one party to another — but we are transferring power from Washington, D.C. and giving it back to you, the American People.” He also re-iterated how he wants to “put America first”, which was met with both positive and negative reactions. Many people agreed with him on prioritizing America, since they feel that our country is not as it once was. Furthermore, people thought that we need to focus on our own country from now on, and prioritize the safety of our citizens. On the opposing side, people disagreed because they think that we need to help other countries that rely on us. Trump opposers focused on his negative words. “..crime and gangs and drugs that have stolen too many lives and robbed our country of so much unrealized potential. This American carnage stops right here and stops right now.” Critics stated the inaugural address was unusually dark and political, delivered in a forum where new presidents have tended to reach for a language of unity and positivity.

Simultaneously, large groups of riots and protests occurred in response to his inauguration, many of them violent. For example, antifascist protesters in DC “smashed storefronts and bus stops”. Several police officers were also attacked and injured from these protests. The ideas behind the protests included fighting for racial equality, gender equality, and more. Police brutality was also a major motive for the riots. However, there were still peaceful protests, one of them being the queer dance party. This was a more lighthearted one, but preached for the same idea: equality. Protesters gathered with rainbow colored apparel and flags to support the LGBTQ community. People had gathered in Washington DC for this protest, which was being planned for a few weeks.

A lot of humor and jokes were made from the inauguration. The biggest and most popular joke was when Michelle Obama received a gift from Melania Trump. Melania handed Mrs. Obama a large Tiffany’s Box, contents unknown. Her facial reaction was cited by many as being super awkward.  This was spread throughout social media. Also, people heavily compared Barack Obama’s inauguration to Donald Trump’s. Donald Trump claimed that the turn-out was massive, extending all the way down the mall; however, aerial views quickly showed otherwise. Furthermore, people compared it to the size of Obama’s, saying how it was actually very small, making it also a running joke.

In any case, America has a new President and the nation remains divided.