A Day Without Immigrants, Arizona 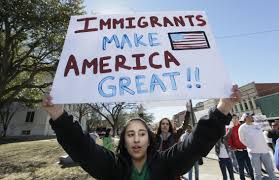 On Thursday, February 16th immigrants and children/descendants of immigrants gathered together in protest throughout the nation. Immigrants from all ages and backgrounds stayed home from school and work to demonstrate how important they are to the nation’s economy. According to news source Arizona Central, “As much as a third of the student-population skipped class in Phoenix area schools.” People participating in this protest were also encouraged to not make any purchases this day as a further step of showing economic influence, though few to zero businesses closed in Tucson. Even Guero Canelo, a local Mexican eatery-chain in Tucson opened by a Mexican immigrant, stayed open.  There was definitely a crowd that participated locally in Tucson. Isabel Mendez, a senior at Tucson High School said, “I wanted to skip school to join in the protest, but my parents wouldn’t let me. The school felt extremely empty that day. I would say a good third to a fourth of the students were absent.”