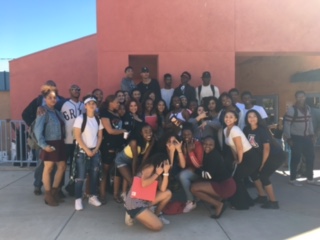 “I have never seen so many black people in one room,” said a student in the crowd of the 9th annual African-American Youth Heritage Day, which took place on February 10th at the Donna Liggins Center. Every year the Southern Arizona Black College Community Support Group (SABCCSG) presents and hosts a day where high schools from all over Tucson join together to celebrate African American heritage. They provide music, dancing, performances and workshops on how to succeed as an African American student. They include cultural aspects like beginning the day with the Black American National Anthem.  When asked what his favorite part of the day was, junior Ramal Hairston, lover of fine arts said, “The dancing, everyone was dancing and singing and I just thought, ‘These are my people!”

The president and founder of SABCCSG, Marie Cephers (our own assistant principal’s mom) stated, “‘Empowering Our Youth to Meet the Challenges of the 21st Century’ has been the goal  of the Southern Arizona Black College Community Support Group from day “1” nine years ago.  We provide career workshops, and local and out-of-state college booths.  Our career workshops reflected our African American community professionals.  In conclusion, our goal was to celebrate Black History Month by inviting students from all seven school districts in Pima County…mission accomplished  – 500 students in attendance.”

Not only was there community music and dancing, but students had multiple opportunities to individually perform on stage including: singing, dancing, interpretive dance, and spoken word. “They even gave us eegees for lunch and I love eegees,” said senior Vanessa Centorami, who went around snagging sugar cookies from anyone who didn’t want theirs.

Although the day was one big party, the hosts, guest speakers and mentors found a spunky way to spice up the educational aspects of the event. Revolving around the African American culture, students were given the choice of different workshops to attend. The workshops included choices for students who were interested in going D1 in their athletic career, those interested in a law career, a medical career, a career in fine arts and even a choice for those students who did not plan on getting a higher education. “They gave me a lot of ideas on how to get involved in the fine arts business,” Sahuaro senior Zalaiya Nefwani stated.

Every year the event becomes less of an event and more of a celebration of color, culture, and the African American student. A huge message of the SABCCSG is to chase your dreams and be proud of who you are, while continuing to be the best you can be in school. There was positivity and a bittersweet feeling by the end of the day, for it was some students last year attending the celebration and for others they had to wait until next year. It was time for all the students to return back to their schools. “The bus ride back was by far my favorite part of the day!” said Kiera Morgan. 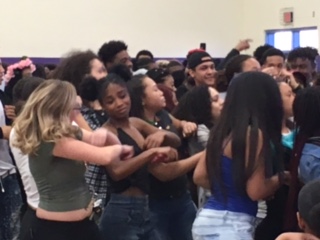 The TUSD bus driver allowed the 40 SHS students to plug in their own tunes.  Mr. Mack, one of the chaperones, insisted that no music with the “N-word” be played, so Zalaiya used her Skate Country (where she works) playlist. Everyone sang along, danced in their seats, and shared plenty of laughs.  Ms. Lange, the other chaperone stated, “The kids were adorable.  I loved seeing them embrace their culture and bond over music and dancing.  By the afternoon, there were plenty of dance battles and friendly slaps on the back.  The camaraderie was sweet to see.” Assistant principal, Tyrone Cephers, stayed for the entire day.  “I told Mr. Estrella I’d even take it as a personal day.”  The African American Heritage Day celebration has continued to bring Tucson’s population of African American students together and put smiles on many faces. Each year the event grows larger and there should be many more events like this year to come.