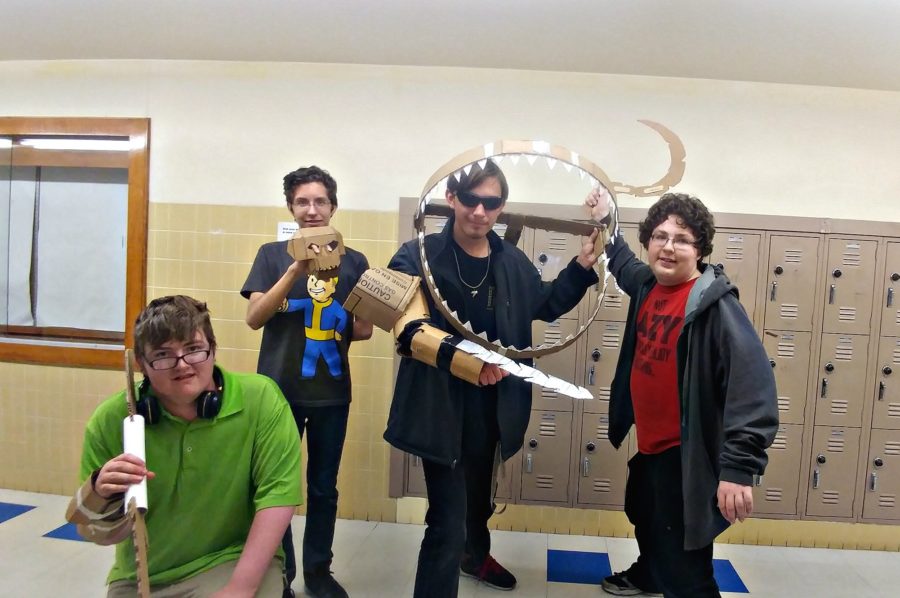 Do you have a passion for building and crafting things? Interested in the world of role-play? How about meeting some unique individuals from your school? Then you should consider joining the Cosplay Club! The first ever and only Cosplay Club in TUSD has almost everything – making costumes and props, role-playing, and sharing your interests. You can dip your toes into all kinds of fandoms, but be careful of getting addicted!

“Cosplay Club is a family-based area where students can come and enjoy their time building stuff from their favorite TV shows (etc.)… It’s basically a free period where you’re allowed to do whatever you want, or it’s like a second counseling place for others,” says the president of the club, sophomore Wesley Hopf.

Hopf was inspired to start cosplaying after going to the Phoenix Comic Convention in 2015. He was hooked ever since. “I believe that there are lots of people that absolutely would love to be a character. They would love to be, for example,  Naruto or The Doctor or Carl from the Walking Dead…I know some  people here would love to do it, because I have seen people walk around wearing 100% Doctor Who stuff or Supernatural or lots of stuff…”

Basically, the club allows you to become anything. The Cosplay Club can do an endless range of designs from anything like Disney characters to deadly weaponry or to each of their own creative ideas. “We make thoughts come to life,” Hopf explains. And then afterwards, the club  sometimes engage in casual larping (Live-Action Role-Play, similar to D&D) with what they create.

The club’s Vice-President, sophomore, and huge Fallout fan, Robert Gillis says that the club is very fun. “[I like how] I can just sit down to what I want to,” Gillis remarks. He also enjoys how much variety the club has – the people in the club is what makes it more unique than any other. Gillis started cosplaying for a year or so with friends. “Back in middle school, we would play a game called ‘Mash-up’, where we would play as our own characters…and that’s what got me into cosplay.”

Whether it is music you listen to, the games you play, or how you dress, most often times than not there are always some people who look down on the things you like and do.  The Cosplay Club seems really understanding of that, and also very accepting. “You won’t be judged here. Your actions will not be judged. Your ideas will not be judged,” Hopf states. Hopf and the members agree that if there is any criticism at all, it would be in the form of something more positive and constructive.

The Cosplay Club started just last semester, but is still welcoming more members. The atmosphere of the club is always lively and full of hilarity. In the club meetings, they usually work on multiple creations (either individually or together) and discuss various entertaining topics such as CreepyPasta, video games, the Sci-fi genre, and more. If you decide to join, you will get the honor of signing your name on a fang of Melissa, their Great White Shark project in-progress. Every member chips in bringing materials, and so the projects are mostly made of wood and cardboard (there is no funding for fabric yet).

The club is still relatively new, but they have a lot of plans for the future, like going on a trip to Comic-Con or making epic projects together. Before the school year ends, the club is  also hopefully going to visit a children’s hospital dressed in their handmade costumes. The details have yet to be developed, but from here on we can expect to hear many great adventures from the Cosplay Club.

If you want to check it out, the club meets every Tuesday after-school from 3:15-4:30ish in room 302. The Club Adviser is Algebra and Math Development teacher, Ms. Cullop, who has a bit of experience in the cosplay culture herself and is embracing all who wants to join.