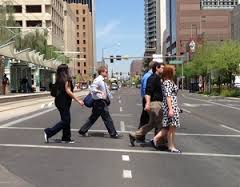 Total traffic fatalities in the US fell by nearly 18 percent from 2006 to 2015, pedestrian fatalities rose by 12 percent during the same ten year period, and in Arizona its worse. “From January through June 2016, there were 2,600 pedestrian fatalities” in Arizona, a vast increase compared to almost 200 killed last year. Arizona is now ranked the third-highest state for pedestrian deaths, up from sixth-highest per population in number of fatalities;  per 100,000 people – 1.4 pedestrians killed. A large percentage of these deaths is caused by distracted driving, unlit streets, and jaywalking.  In a study done by 2014 Alliance for Biking and Walking, the report on 2013 crash victims shows:

At least 11 tested positive for drugs or alcohol.
15 were hit at night, nearly half in unlit areas.
At least 16 were not in a crosswalk.

Five were charged with a crime or traffic offense.
At least two are being sued for wrongful death.
One showed signs of impairment.
Nearly all of them crashed within a block or two of a major intersection.