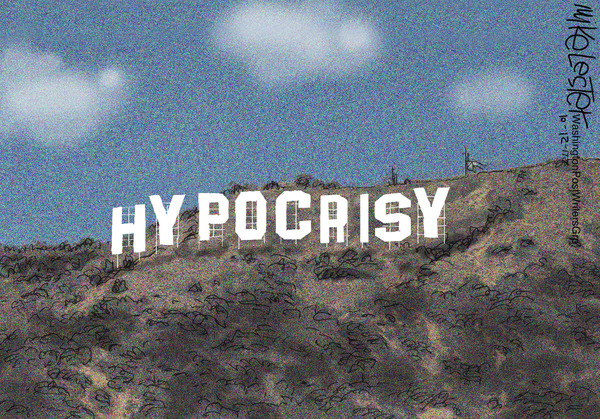 When we believe in something or say we do, we’re expected to act on it. This especially applies to well known figures that have a massive sphere of influence over their audience. This, however, doesn’t seem to apply to the world of Hollywood. When it comes to climate change, we can support it all we want, but does it mean anything when we can’t act upon it?

For example, award winning actor Leonardo DiCaprio who lectured about how corporate greed is the cause of climate change in Switzerland of 2016, but in 2015 emails from Sony leaked showing that DiCaprio took a private jet six times in six weeks. On average Mr. Environmentalist here is responsible for ten times the carbon emission for every private flight he takes compared to average passenger on a commercial airliner. The only thing DiCaprio is contributing is his alarming carbon footprint. DiCaprio isn’t the only hypocrite in show business however, Al Gore’s electric bill alone is twenty times larger than the average American’s bill for his mansion, probably due to extravagant ‘get togethers’ people of wealth have so often as part of their lifestyle.

How can one blame something else for the cause of global warming, when they have done more damage than the average human? Global warming is a serious problem that shouldn’t be taken so lightly. How do these large figures expect us to improve the environment when they can’t begin to fix themselves first? If people want to emphasize change they must first be an example of what they stand for and there should be no excuse for celebrities.

However, it goes beyond celebrities. In 2012 The Lorax film was released and the theme of the movie is taking care of the Earth. In order to promote the movie, one of their sponsors had created a commercial promoting a Mazda SUV saying it’s environmentally friendly and has the Truffula tree seal of approval, which doesn’t exist as an official award. The vehicle isn’t even eco friendly to be something that associates with a movie about caring for the environment. It really devalues the message of the film and ruins their credibility for having sponsors that are just going to give you money, if you pretend all is good.

Hollywood follows the philosophy of, “Do as I say, not as I do”, but that never works out. If you want change do it yourself first obviously, then you get results. If no one changes, then everything either stays the same or everything becomes worse. If these so called environmentalists want change, they must first follow their own rules and be a solid example of protecting the Earth by reducing their carbon footprint. You can’t tell people how to live if you can’t follow your own rules, and people like Leonardo DiCaprio need to realize this.