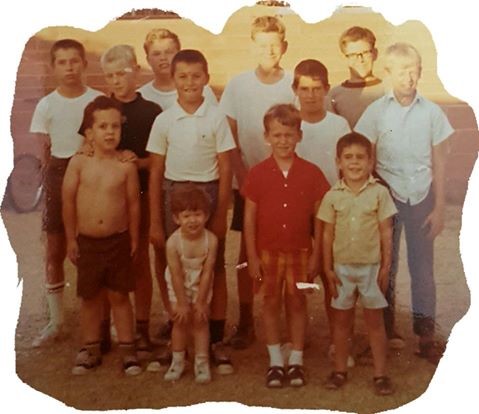 Rick is on the far left with the white T-shirt

This Friday night’s game is the 40th annual and also the longest active memorial game in the United States.  Coach and Athletic Director, Steve Botkin, lost his brother Rick, who was killed tragically in an automobile accident during his Senior year 1977, but has kept his memory alive through this annual Rick Botkin 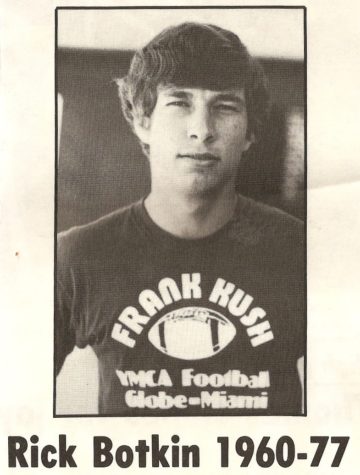 memorial game.  Right before kick-off, the Sahuaro Administration, Coach Scott McKee and the football team will honor Botkin’s family and many of Rick’s friends.  Most travel from out of State to attend the game and pay tribute to him. The following is a tribute written by Jay Dobyns…Former Cougar and ATF Agent.

In the middle of the 1977 football season tragedy struck Sahuaro High School.
After a wonderful performance, leading his team to a win over Palo Verde High, our All-State Quarterback, Rick Botkin – our classmate, our friend, our teammate, our brother – was killed in a vehicle accident. At 9pm, he was the hero. Hours later, our “Friday Night Lights” dimmed and then went black.
Other SHS students, including our star runner Steve Jarrett and our classmate Barry Raab, were critically injured in the accident. They were hospitalized and fighting for their lives. 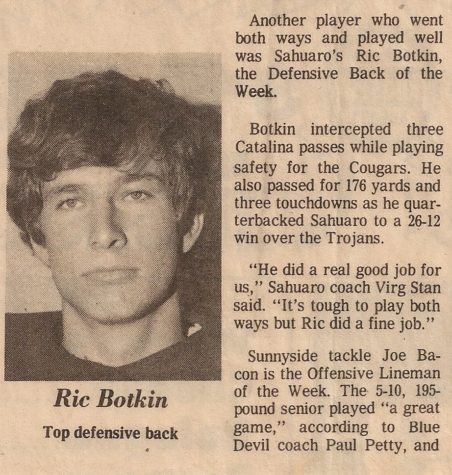 Rick could run like few I’ve ever seen. He could throw and hit and play football better than the rest of us. I was two years younger and a thousand times less the athlete; for me it was incomprehensible that anything could defeat him. Not Rick. I idolized him. I admired him. Everything about him. I wanted to be like him. I wasn’t the only one.
Rick was more than a ‘jock’. Everyone loved him. The Smokers on Vicksburg, the Cowboys, the Motorheads, the Nerds, the Brainiac’s,– his smile and kindness charmed everyone. He was like royalty. It’s hard to imagine, at 17, being a legend. Rick was.
Rick’s passing was the kind of tragedy that brings communities and schools to their knees. A young man with an endless future was gone in an instant. Senseless. Unexplainable. No logic or reason could be applied. As young people, most of us were not yet equipped to handle a life event of this magnitude. Many had never lost anyone close.
Our team was made up of boys between 15 and 18; now mentally, emotionally and spiritually broken. The guy we all turned to when something went wrong wasn’t here anymore. We were lost. When you’re young you think it will never happen to you. Then, if death could touch someone invincible like Rick, wow, it could get any of us. I was scared.
Our Head Coach, Virg Stan, knew we were fragile.
He called a team meeting on Sunday morning. As he walked in tears streamed down his cheeks. His eyes were swollen and red. His assistants Bob Vielledent and Lance Pricket followed him. They were a mess as well. As Coach tried to speak, he was forced over and over to pause and compose himself. There is no chapter in the coaching manual for guidance on something like this.
What he said is still in my heart. He normally stood before us as we sat at desks. He grabbed a chair and pulled close:
“There are things in life that we do not plan for. That is why they are so hard to accept and understand. We had no time to get our hearts ready for what just happened. Rick Botkin was loved by all of us. He can never be replaced. Let’s just think about Rick right now. Football isn’t important today.”
The next week’s opponent had graciously offered to forfeit the game; volunteering us the win in an unheard-of sign of sportsmanship.
“This is your team, not mine. I will follow you this week, not you following me. I will support with my whole heart the decision you make. We can accept this forfeit, take the win, and mourn the loss of Rick as a team. This may be the best route for us to take given what has happened. We will spend Friday night together as a team, as Rick would have wanted us to. We will stick together no matter what. If we do not play, there is no disgrace. We will hold our heads up.”
Coach paused.
“When I think of Rick I ask myself, what would he do?
Would he want to show this city that we are the football team from Sahuaro High School? That even in the face of adversity we will fight on? Number 25 will still lead this team. If you decide to play I will coach you the best I can in honor of my player. You will play your best in honor of your friend. The choice is yours.”
Now, entirely choked up and no longer able to speak, Coach left the room and said he would be back in five minutes for our answer. The room of only players was quiet. We could hear him sobbing in the hallway with the other coaches. We looked at each other and we knew what to do. 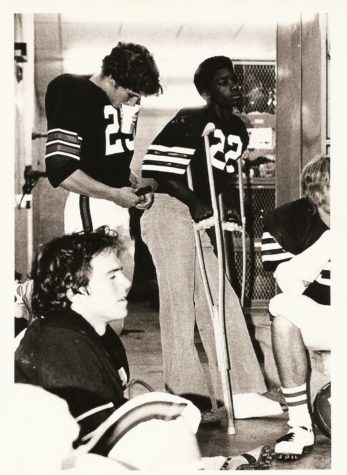 Our team had only 15 healthy players. That Friday night young ball players with casts on their arms and legs dressed in full uniforms to give our opponent the sideline illusion we had more players than we really did. We were determined to try.
Coach kept his promise. He coached his best. We kept ours too and played our hardest. It simply was not enough. We lost the football game.
But, we had won the game of dignity and loyalty. Rick inspired courage that would never be captured on the sports page, never be displayed in a box score and never credited anywhere but in our memories.
After that game, our families and classmates swarmed the field. Hugs and tears were everywhere. No one wanted to leave the grass. This is where we knew Rick best. We didn’t want to say goodbye or let him go.
Rick Botkin, more than our teammate, our friend now gone, continued to lead us, just like Coach said he would.
The other team’s players, coaches and fans circled around us, our team, our school — and they began to clap. They had tears in their eyes too. They knew we played through broken hearts to honor our friend. When they turned off the stadium lights we were all still out there.
They didn’t cheer the game, the cheered the boys who had become men that night, and more, the one who was no longer there.
RIP Augie (Rick). Never forgotten. Still cherished.