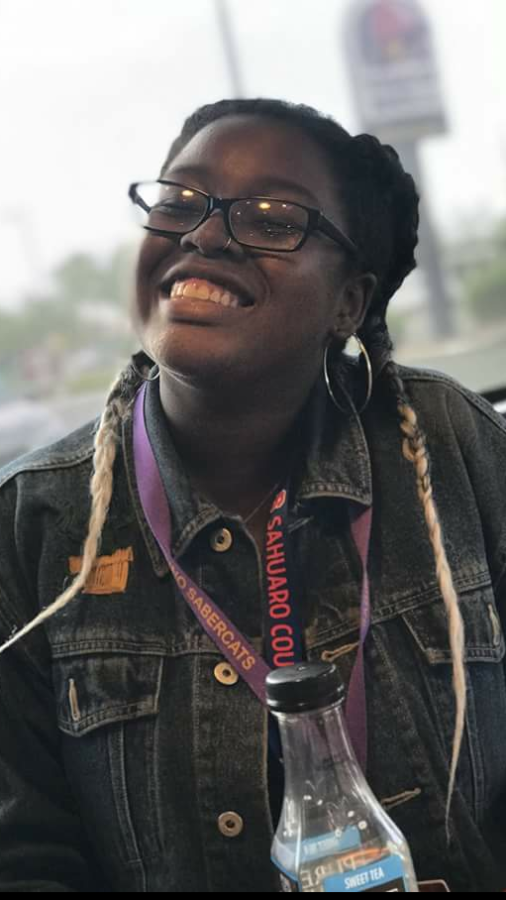 “It was the same thing every time – a white girl with blonde hair and blue eyes getting the guy of her dreams,” Jordan Ford says about the books she read as a child. Jordan Ford loves to write.  As a matter of fact, she recently wrote about her love of writing.  I was given the opportunity to interview Jordan and found out she wants to be a professional author when she’s older. When I asked her what genre she likes to write, she replied, “Anything, it doesn’t matter.” She will write just about anything, from events that took place in real life to romance. This is Jordan’s story…

I was at Magee Middle School, a middle on the east side of Tucson, is where I started to love to write. In 7th grade, I became very close to my small circle of friends. We used to all hang out every weekend and share everything with each other. One of the things my friends shared with me was this app called Wattpad. It was for writers to write whatever they wanted to. Specifically we were reading fanfictions about a group of guys called magcon. Looking back at it now, it was really weird that we all obsessed over them even though most of them really didn’t do anything. But that’s besides the point as we all read them, I slowly started to see that there was no diversity in any of them. It was the same thing every time  – a white girl with blonde hair and blue eyes getting the guy of her dreams. When I started to realize all of this it made me upset not seeing that what I enjoyed reading had no one like me in the  books. I realized that the girls writing these weren’t girls like me either. Once I realized that I lost interest in reading stories like those.

By September of that year I decided to write my own; it helped me escape the family drama I was going through and it allowed me to finally have something I enjoyed reading with people like me. Writing became my coping mechanism. By October, at my best friend’s birthday party, we all saw that my first “book” I wrote had over one thousand reads which was a big deal to us since we all wrote.

One day at school in about December people in our grade started to find out I was writing and that the people I wrote about were white people so a lot of people I associate myself with called me “white black girl”, which discouraged me once again to stop doing what I liked to do. I stopped writing for most of the grade up until the summer going into eighth grade.

In eighth grade people finally stopped calling me white black girl, but sometimes they would, but I was just happy it wasn’t every day like in seventh grade. It took me all the way up until freshman year when I was going to Sahuaro HIgh School when I finally stopped caring what people said and I started writing again.  My writings still got a good amount of reads on the app, but I didn’t care about the reads anymore, I was writing for myself and it felt great. Freshman year I started exploring more genres of writing such as romance, drama, and teen fiction, but before I just stuck to writing fan fiction.

Freshman year some people still didn’t like me because the teacher we had would constantly use me as an example because I was doing really good and I was also a good student. But after middle school, I didn’t care if people liked me or not, I realized there was no purpose to care. I realized no matter if it was the people from middle school calling me white black girl, or the people who would make fun of me because I “fangirled” over a group of guys, or if it was the people mad at me because I was succeeding in my classes and enjoyed what I did, I always knew that there would be people who didn’t like me for no reason and that would not stop me from what I enjoyed too. And I enjoyed writing.

It was a crazy roller coaster to find myself and to get over what people said. I realized I will always want to be a writer in the future and if I keep listening to other people’s opinion it will hold me back from my dream of being what I want to be. After all of that I was finally happy with myself and my writing .