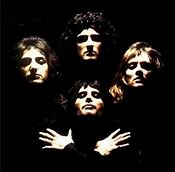 We will, we will, rock you.  If you just said this line to the tune of Queen, you know what I’m talking about.  If you’ve never heard of the band Queen, you’ve been living under a rock and you need to look them up. They are the best rock band to ever exist! Not only do all the band members have great stories, but their music represents it well and gets the crowd pumping every time they hear them. The band consist of 4 men; Freddie Mercury the lead singer, Brian May lead guitarist and vocals, Roger Taylor drum and vocals, and last but not least John Deacon the bass guitarist.

All of these guys originated from London and formed their band in the 1970’s. They were the first rock band to really introduce rock and since then have inspired many other rock bands that you hear about today. Sadly, Queen fell apart when the amazing vocalist, Freddy, died from AIDS on November 24th 1991. You will never see a band become as good as Queen was, but you will see them try.

What makes this band so great though? It’s pretty much everyone in the band, but especially lead singer, Freddy Mercury, who was born is Zanzibar – now Tanzania – in 1946. He was sent to school in India and his first period as a musician falls between 1958-1962 when he played the piano in a rock’n’roll school-band while living in India. Freddie (Farrokh Bulsara back then) moved to England in 1964 where he grew his hair and became a huge fan of Jimmy Hendrix. Freddie saw him perform live fourteen times, and turned his interest toward rock music. What makes Freddy’s voice so amazing is because his voice is one that you know when you hear it. His vocal range is amazing for a male singer. Going as deep as bass low F (F2) all the way up to soprano high F (F6). He was also capable of getting to tenor high F (F5). He is also very passionate about his music and uses emotion in his voice which many artist rarely use these days.

November 2nd 2018, is the day that I have been waiting for. This is the day the movie about the band Queen will be released. This movie is going to be the best movie of 2018 and will definitely win an Oscar this year. Most movies that come out these days, in my opinion, are not that great and memorable. Although, from the looks of the “Bohemian Rhapsody” trailer and the life of Queen this movie will be one to remember. 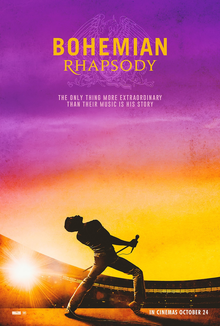 The movie title “Bohemian Rhapsody” was chosen because this is one of their most famous songs that they wrote and produced. This song is personally my favorite and the trailer also includes many other songs that Queen wrote that I grew up with – which makes me happy. I’m also surprised on how alike the actors look to the actual Queen members.

The movie is going to include what it was like at their greatest appearance at their “Live Aid” concert at Wembely Stadium in 1985. Seeing the movie the first day will be an experience for me and many other Queen fans; not only because you get to see the life of Queen, but you are surrounded by other people who are big fans of Queen, so you will really get that good vibe. You may want to pre-order your seats however because this movie theater is going to be filled weeks before it comes out.