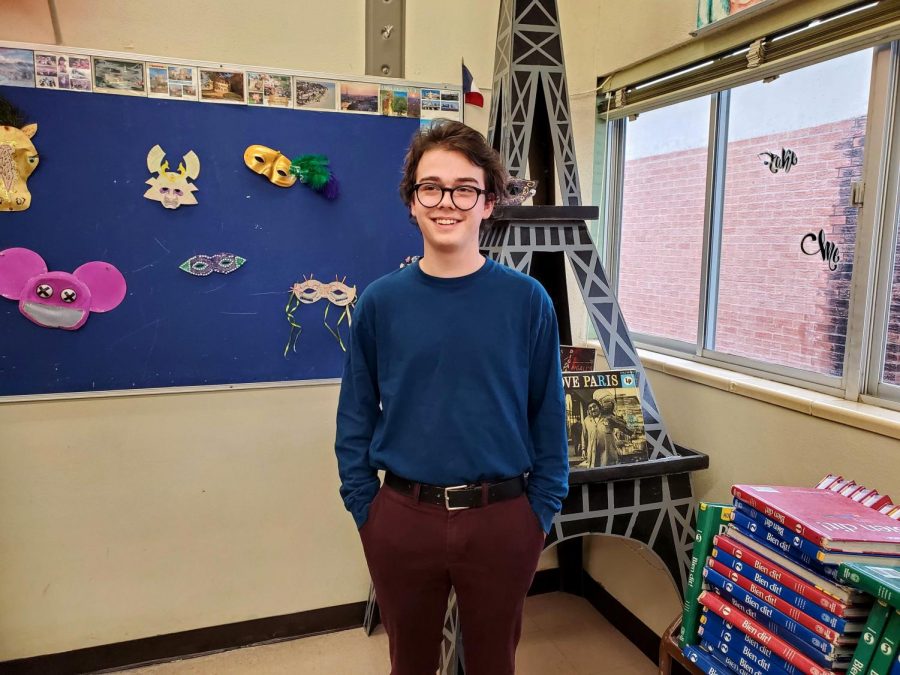 Calvin Mueller is a regular trailblazer here at Sahuaro, as he is our first ever fourth-year French student! Calvin’s passionate amour of the French language and culture has made pursuing a further education past the normal 2 years easy for him. Calvin, whose name in French class is Laurent, approached Madame Kelly to create a fourth year class and she did with, “No question.”  He also helps her by aiding for a first-year French class. Some would call Calvin the poster child of the French program here at Sahuaro.

Madame Kelly knew that Calvin was perfect for continuing his education because, “He is just so, so motivated. He passionately pursues his education and never gets distracted. He is able to work individually and still excels.” She continued, “I know he is going to go far in whatever he does.”

When asked, Calvin said his favorite part of the fourth year class is, “Being able to understand more of the language and to be able to focus more on vocabulary that interests him.” The best part of the program to him was, “The friends that he made and the music video Madame Kelly plays every Friday. Like, I have gotten to choose the video sometimes and I love foreign music. “

He likes continuing his education in French because “It looks good for college and because I love the teacher.”

The class is set up so that Calvin is the only fourth-year student with about 11 other third-year French students. Calvin is able to have full conversations with Madame Kelly in almost fluent French and when he starts speaking to her in front of younger students you can just see the astonishment on their faces. Some of the work he does consists of reading poetry and songs, writing complex papers, and keeping a journal, which he writes in every day. He gets a more personal approach to the French curriculum and can get more attention from the teacher, which he can use to increase his skills.