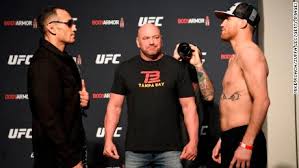 Last night UFC 249 brought forth some amazing fights with a card full of talented and accomplished fighters. Headlining the event was Justin Gaegthje and Tony Ferguson, two young and very successful  fighters looking to put themselves in contention for a title shot with a win over one another. The co-main event was between veteran Dominic Cruz and two division champ Henry Cejudo.

The bout between Dominic Cruz and Cejudo was highly anticipated as Cruz had held the Bantamweight title previously for several years and defended it multiple times in multiple professional fighting organizations. Injuries would continuously sideline him, forcing him to vacate the belt. During this absence the title switched hands multiple times, most recently between the aforementioned flyweight and bantamweight contender Henry Cejudo and Tj Dillashaw. With Henry Cejudo being dual champion in these weights, it would make sense to have Dominic fight for the title because he had the most title defenses in the division while he was active.

The official Vegas odds had Cejudo as the favorite which was opposite my prediction of a win by Cruz. I felt he had a good chance of winning as he usually fights bantamweight unlike Cejudo who was making the jump up a weight class and also Cruz has come off many inactive streaks with a win.

The fight ended up playing out in favor of Cejudo – he incorporated a leg kick that went unanswered by Cruz most of the fight and he was getting the better of the exchanges on the feet. The fight ended in the second round with two seconds left after a ref stoppage which Cruz protested. He got hit with a well placed knee which left him rocked, immediately after Cejudo saw his opening and was all over Cruz with about another 10 more unanswered ground strikes according to Joe Rogan who was sitting cage side and commentating on the fight.

Cruz continuously protested the stoppage saying he was moving upwards and that the ref stepped in too early to end the fight. During Cejudo’s post fight interview, he announced his retirement from the sport as he felt he had accomplished everything he hoped to as a mix martial artist having won Olympic gold in wrestling and being a two division champion in the UFC.

The main event was originally slated to take place between Khabib Nurmagomedov and Tony Ferguson but was canceled last minute due to the Corona virus messing with scheduled events and travel restrictions were in place once Khabib went to Russia. Once the event was rescheduled Khabib was forced to stay in Russia so Gaethje stepped in last minute to face Ferguson. This was an almost equally hyped match up in the MMA community because both fighters are known for their striking ability on the feet being two of the best in arguably the UFC most completive divisions at lightweight.

The fight started with some solid combinations for both fighters in the first round good boxing exchanges and some feeling out early on by both fighters as it’s a championship fight that goes five rounds or 25 minutes. Gaethje appeared to be getting the better of the exchanges most of the second round maintaining octagon control and walking Tony down hitting him with some nasty right hooks. The end of the round saw an explosive uppercut by Ferguson that rocked Gaethje at the bell but he recovered soon after. The remainder of the fight saw Gaethje stalking Tony, hitting him some very hard shots that not many before him were able to withstand. Tony would develop a cut under his eye and his eye eventually started to swell obscuring his vision. The fight was stopped midway in the fifth round after Gaethje hit Ferguson with a right jab and Tony started to shake his head as if to say he had enough.  He continued to fight as all fighters do, but the ref Herb Dean made a good stoppage by stepping in after. Ferguson had simply just taken too much damage the whole fight for the ref to allow him to continue.

Gaethje immediately called out Khabib in his post fight interview saying he is the only challenge and that as an athlete he holds himself to the highest standard and wants to represent America as the United States best vs Russia’s best in Khabib. Overall the fights were outstanding with a lot of action during and after the fights.