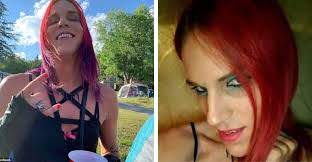 (Future?) Sheriff Aria DiMezzo, who ran with the campaign slogan “F*** the Police” under the republican party and fully expected to lose as a write-in candidate, won the GOP nomination for Cheshire County Sheriff of New Hampshire on Tuesday. The victory was first reported by Inside Sources.

Aria DiMezzo makes it clear to the public, especially her supporters, that she is a satanist and anarchist and although you’d think that would scare a lot of voters away, she’s built a platform out of them. DiMezzo favors ending the prosecution of drug crimes, sex work, illegal immigration, and other ‘victimless’ crimes. However, it’s tough to say whether Ms. Dimezzo won the election due to her stance on our modern day issues or the fact that a lot of republican voters selected ‘R’ on their ballots and unknowingly voted for her. But for anyone who voted for her without knowing anything about her, she had this to say: “I didn’t think that so many voters were just…completely and totally oblivious about who they are voting for.”

“I’m running for sheriff because I oppose that very system, and the sheriff has the most hands-on ability in Cheshire County to oppose that system,” DiMezzo said. “The system that let you down by allowing me — the freaking transsexual Satanist anarchist — be your sheriff candidate is the same system I’m attacking. I’m sorry, and I know it hurts to hear, but that system is a lie.”

“The entire thing is a lie. It’s broken from beginning to end, and my existence as your sheriff candidate is merely how this reality was thrown into your face,” she said.

“Sweet Satan, how can you not be an anarchist?!” DeMezzo wrote to her blog. “Between 75 and 80 percent of the primary voters — the ones alleged to be more politically aware than the average voter — were completely and totally ignorant of who they were voting for! What is the percentage with the average voter? 90 percent? 95 percent? These people are deciding who gets to rule you,” she said.

The chair of the Cheshire County GOP, Marilyn Huston, congratulated DiMezzo for the victory and said, “he did very well with the primary and that was wonderful.” Huston continued to purposely mis-gender DiMezzo as “he” even though the candidate has clarified many times before that she identifies as a female.

“Aria really came into the Republican party because he was unable to get onto a Libertarian ballot,” Marilyn continued to run her mouth using the wrong pronouns. Women attacking women in 2020? What happened to WAP: Women and Power??

What are your thoughts?