One Step For Womankind 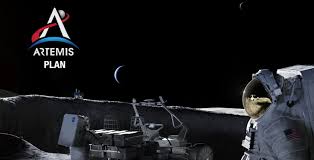 Image from Our Community Now

For the first time since 1972, humans will be landing on the moon. But this time, it won’t just be a man; NASA is planning to send the first woman to the moon in 2024. This plan is $28 billion dollars and a part of the program called Artemis. BBC said, “Astronauts will travel in an Apollo-like capsule called Orion that will launch on a powerful rocket called SLS.”

On Monday, September 21st, the NASA administrator, Jim Bridenstine, spoke of the plans. “Speaking on Monday afternoon (US time), Nasa administrator Jim Bridenstine said: “The $28bn represents the costs associated for the next four years in the Artemis programme to land on the Moon. SLS funding, Orion funding, the human landing system and of course the spacesuits – all of those things that are part of the Artemis programme are included,” he said. He also explained how it is “critically important” that they get $3.2 billion for the 2021 human landing system.

A bill has already been passed by the US House of Representatives allocating $600 million for the lunar lander, but more funds are needed to build the vehicle in full.

Bridenstine explained to CNN that the first woman on the moon will be someone “who has been proven, somebody who has flown, somebody who has been on the International Space Station already” and someone who is already in astronaut corps. Sending astronauts to the moon will hopefully renew America’s leadership in space. The NASA chief said, “I think it’s important we start identifying the Artemis team earlier than not… primarily because I think it will serve as a source of inspiration.”