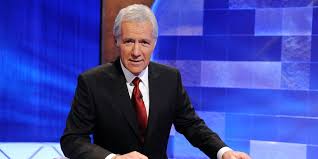 I remember going to my grandma’s house every weekend. We had fun times, but some of my clearest memories were when we watched Jeopardy together. I remember rolling my eyes when she put it on, but now I wish I’d seen more of it with her. Sadly, both my grandmother and Jeopardy’s show host, Alex Trebek, have passed away at the age of 80 from pancreatic cancer. They will be sorely missed by all, and I will always remember Jeopardy as the show I watched with someone who was very much like a mother to me.

At the start of his career, he worked in the Canadian Broadcasting Corporation in 1961, working nights and once replacing every announcer in every job. His first hosting job was in 1963 called Music Hop. In 1966 he hosted a quiz show called Reach for the Top for high schoolers. Starting in 1967 he hosted the Canadian Broadcasting Corporation, introducing new music programs, a weekly skating program, and a weekday afternoon game show. In 1969 he started Strategy, a weekday game show and a radio show.

In 1973, Trebek moved to the USA from Canada, and started The Wizard of Odds, an NBC game show. A mere year later, he hosted the popular game show High Rollers. In between hosting High Rollers, he hosted another CBS game show: Double Dare. He also made guest appearances on multiple shows such as Card Sharks, Golden Girls, and To Say The Least. After High Rollers was cancelled, he hosted Battlestars, Pitfall, a revival of Battlestars after both shows failed, Malcolm, and Lucky Numbers, which was supposed to bring High Rollers back, but ultimately failed. After all this, he became widely known for his hosting in Jeopardy.

Jeopardy was a game show where you answer questions by requesting the name of the topic and the amount it’s worth. The player then has a certain amount of time in which they have to find the answer to the question, which is in statement form, in the form of a question, i.e. “Who is…”, “What is…”, “When was…”, and make money for each question the player gets right. The player who makes the most money advances to Double Jeopardy. It is played the same way as Jeopardy. The person who wins Double Jeopardy also advances to Final Jeopardy, where they can make the most money.

He did two revivals for Jeopardy, which helped him start in 1984, and he hosted it until his death this year. The final episode of Jeopardy will air on Christmas Day this year.

Alex Trebek hosted many shows and was an amazing host. He will be sorely missed by all who knew him, all who met him and all who watched him. Rest in peace Mr. Trebek. You are remembered and live on in our memories.