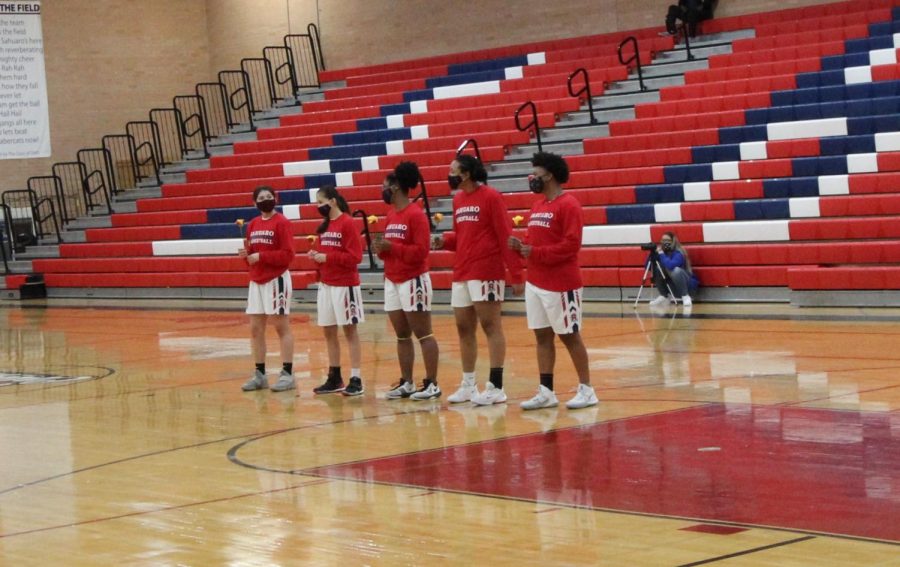 Your Sahuaro varsity girls basketball team is yet again off to a hot start and looking for another lengthy playoff run. As of March 5th, the team is 15-1 and according to Maxpreps.com they are one of the top teams in Arizona, including being second of all 4A teams in the state. The team has gone through most of their games with ease but have had a few nail-biters, and one game that just didn’t go their way. They won a 65-55 game against Salpointe Catholic that had them down by double digits at multiple points throughout and they had a very close 57-54 win @ Flowing Wells. Their one loss of the season was to Salpointe, who took their home-court advantage and got a decisive 61-31 win. Although there were a few close games throughout the season, most of them were complete stomp matches as throughout the season they scored over a thousand points and only allowed a little over 500. Their highest scoring game of the season was a 93-42 win over Casa Grande, and in a match against CDO they only allowed 8 points all game. The team was on a roll throughout this season, but that’s nothing new for how the team’s been playing over the past few years.

Over the past few seasons, the girls basketball team has been the brightest spot of Sahuaro sports. They’ve made the playoffs the past 4 seasons and the last two have ended in the final 4. Over those past four years, the team has won 97 games and only lost 19. Head coach, Steve Botkin has been with the team since 1987, and throughout the 2010’s he posted a 218-67 record and was recognized as Arizona’s coach of the decade. His teams have been good, some have been great, but that state championship has alluded the team, as it has for seemingly all of Tucson basketball sports teams. The last time any Tucson team won the state championship was in 2011. If there ever was a time to break that drought, it would be this team, this year.

The team is doing great this season and it’s not hard to see why. They’ve got a stacked roster, which includes multiple future D1 basketball players. Student Body President and team captain, Alyssa Brown, has many accolades to her name – she won Gatorade, Max Preps, Arizona Interscholastic Association, Arizona Republic and All Sports Tucson player of the year. She also has scored the second-most points all-time in southern Arizona and her 932 points in her Junior year are an Arizona record. The other team captain is Alyssa “Lucky” Frankie, who was an AIA and AllSportsTucson.com player last season. Her deadly shooting has been temporarily shut down as she currently has a broken finger, but she is expected to return for the playoffs. Another key piece to this team is Forward, Lily Watson; she is described by both teammates and coaches alike as a very passionate player who can light a fire under her teammates. Along with her defense, rebounding, and scoring she is one of the most well rounded players on the team.  Three-star players, no matter how hard they try, can’t win a game by themselves, so it’s a good thing that the other girls on the roster are no slouches.

The rest of the team, while not getting as much attention, have still given a lot to this team in whatever role they play. Starting Center, Alyssa Vinsik always puts work in the paint, even if it doesn’t show up on the scoreboard.  The other two seniors, Mia Boatner and Amyra Perry-Fultz act as rotation players, but they also help their underclassmen teammates to be the future of Sahuaro basketball. The Juniors on the team are Isabelle Saldivar-Hale and Madison Eaton, while they are also both rotational players as of right now, they will get their chance in the spotlight next season. The team has two sophomores on the roster, Ayjanna (A.J) Bonapart and Nelly Ponds and the single Freshman on the roster is Cassandra Coolridge. All of them are young players who flash potential in the few minutes they get and project bright hopes for the future of Sahuaro girls basketball.

The regular season has ended and the playoffs are among us. Finishing with a 15-1 record got Sahuaro the #3 seed in the playoffs, with a home game versus #14 ranked Thunderbird. The two teams above Sahuaro happen to be Salpointe, the team they went 1-1 against in the regular season, and Seton Catholic at the #1 seed. Seton Catholic was the eventual winner of last year’s tournament and took out Sahuaro in the semifinals. Could we see a rematch of last year’s semifinals in this year’s state championship? Only time will tell, but I’d definitely recommend keeping up with the team, even if it’s not in-person.