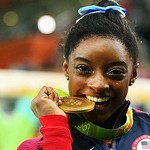 It’s okay not to be okay is the message Simone Biles is coming to Tucson to spread on September 21. The highly decorated Olympic medalist has no regrets about her decision to opt-out of five of the six finals in Tokyo to focus on her mental health.  Biles returned later and left Japan with a silver medal from the team competition and an individual bronze on balance beam. Biles pulled out of events to deal with “the twisties.” The twisties is a mental block that causes the gymnast to loses their awareness during a routine, and can lead to serious damage and in worst cases leading to paralysis.  Simone informed her coaches that she was going to withdraw from the floor event, but her coaches reassured her that she would be okay. She replied with, “No. I know I will be fine, but I can’t risk the medal for the team, so I need to call it.”

This garnered lots of attention, some criticizing her, and others extremely proud of her for putting herself first. “I gave an outlet for athletes to speak up about their mental health and their well-being and learn that you can put yourself (as a person) first before the athlete.”  The amount of pressure on any Olympian is certifiable as everyone in the world has their eyes on the athletes. Simone opened up to the world talking about her mental health, showing she was not ashamed and took her personal needs into consideration for herself. When she came back from her break, she was in a higher mental state.  Now, she will be part of the post-Olympic Gold Over America Tour.  The 35-city exhibition, which kicks off in Tucson, Arizona at the Tucson Convention Center on Sept. 21, will incorporate gymnastics and dance elements but also feature a segment led by former UCLA gymnast Katelyn Ohashi on the importance of taking care of yourself mentally.

Simone talked to a reporter sometime later, opening up more about why she opted out of competing, even getting emotional during the interview saying, “I just don’t trust myself as much as I used to, I don’t know if it’s age, but I’m a little bit more nervous when I do gymnastics. I feel like I’m also not having as much fun, and I know that… this Olympic Games I wanted to do it for myself, and I was still doing it for other people, so that just hurts my heart badly, that doing what I love has been taken away.” For tickets and information to see Simone Biles at the TCC, click here.