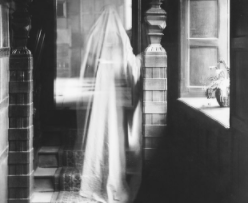 Tucson may be a simple town that many would even call boring, but if you love anything spooky we’ve got multiple places that you can visit that are said to be haunted. If you’re lucky you might be able to get goosebumps from these haunted and paranormal places.

If you live in Tucson you definitely know about The University of Arizona. The building for their Centennial Hall is not very old but apparently has more than one spirit hanging around. They say one of the spirits is a Spanish male

because the land it’s on was traced back to the Spanish Colonial period in 1521. The spirit supposedly has been seen many times wandering around the catwalks above the stage and in the backstage area. This Spanish male calls the place home along with a lady who was reported wearing Victorian-style clothing and she hasn’t been very friendly. Not only has she tried distracting actors during performances, she also seems to get blamed for pushing people on the stairs and hallways.

Many go to The Fox Theatre hoping to spot a ghost and the place has been visited by mediums and ghost hunters who explored inside and agreed that there are several spirits roaming the building. There have been outbursts from the wings, strange giggling, and even during some live performances props have moved on their own. They think that a man who died in a car accident outside the theater is one of the spirits there.

Bloom Elementary’s principal passed away and very unusual stuff has been happening ever since. It seems like the principal is still trying to keep everyone in check and making sure things are running the way she wants. Her apparition has been seen wandering the halls and the staff has said doors will frequently lock or unlock by themselves.

You probably wouldn’t normally suspect a ghost to be in a local bank but the one at Bank of America loves to make himself known. Staff has heard unexplainable heavy footsteps on the stairs and doors being slammed. A spirit who looks young and has a beard has been spotted walking around the bank’s lobby.

A place that would be easier to believe is haunted is the Tucson Medical Center. So many people have reported sightings of apparitions of a variety of people like a young child, an elderly lady, and even a ghostly cat. Staff and patients know this place has all kinds of paranormal activity and the staff has even complained that they get their hair pulled, their faces slapped, and are hit by unknown forces. Some nights they worked they’ve heard what they describe as phantom footsteps and disembodied voices. The spirits even mess with the patients and they say their chairs have been pulled away as they went to sit down, but there was no one else in the room with them.

It’s safe to say even places you least expect could be haunted so be careful!