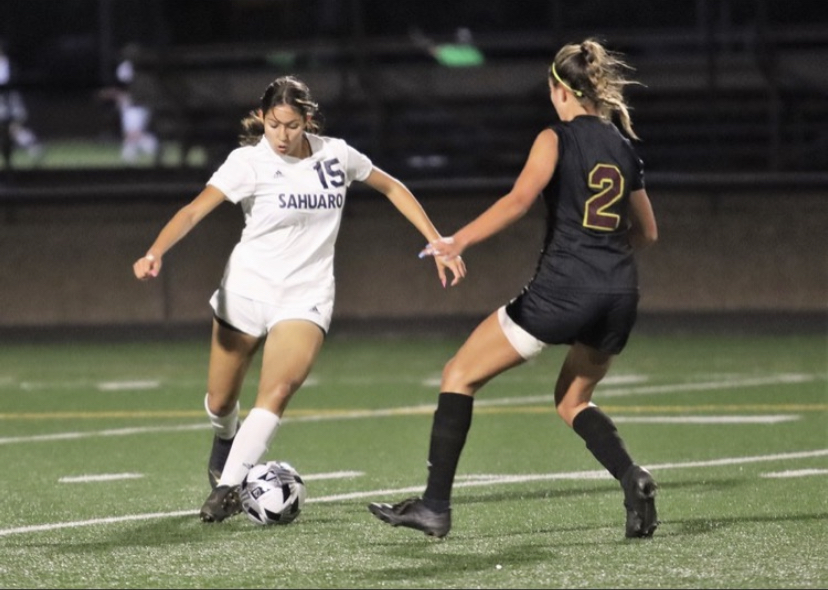 “Soccer is something I couldn’t live without…I have always and will always have so much love for the game.” Junior Anabelle Canto Parker is a student-athlete on Sahuaro’s Varsity Girl’s Soccer team. She has been playing soccer for 13 years and has been playing for Sahuaro since her freshman year. She started out playing on the JV team, but moved up to varsity starting her sophomore season. “It was nice moving up to varsity because the level of intensity is way higher…I can feel myself getting better every day.”
During the school soccer off-season, Anabelle plays on a club team throughout the city. She plays for FC Sonora and the team she is on is the 05 Jaguars. “I do love playing school soccer, but I also do enjoy club. I have played with most of the girls for years and we have an unbreakable bond.”
When Anabelle is on the field, she typically plays on the defensive line. She used to play an offensive position (forward), but her coaches noticed her strong defensive capabilities and she continues to play in the back. “I like playing defense, it can be difficult at times, but it’s a great position.” 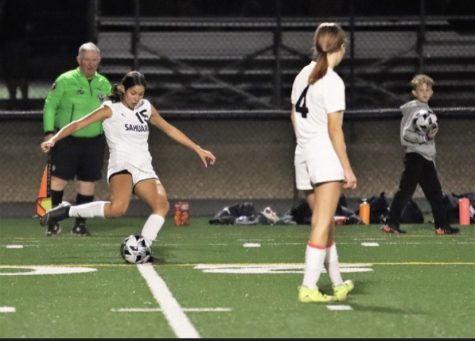 To be able to commit and play a sport for 13 years takes a lot of dedication and inspiration, so who inspired her to do just that? “My soccer inspiration is Alex Morgan, but my parents were the ones that really brought soccer into my life…I have so much love for the sport.”

Off the field, Anabelle is a stellar student with good grades and an exceptional GPA. Her current GPA is at 4.1 and she plans to make it even higher between now and graduation. She is currently taking 2 AP classes and an honors math class to achieve this goal. “School is very important to me. I was taught at a young age that academics come first and it is of great benefit to be someone who is educated, especially with what I want to do in the future.” Anabelle has big plans after high school. She doesn’t exactly know what college she wants to attend yet, but she knows she wants to further her education and study psychology. She would like to pursue this major in hopes of having a career as either a therapist, psychologist, or social worker. Anabelle is the type to always want to help and better people’s well-being, and she thinks she can do that by pursuing one of those careers.

Anabelle is an incredible athlete and an exceptional student in the classroom. She hopes that these qualities lead to scholarships and further success in college. “I have big dreams and goals for my future after high school, this is only the beginning.”